This research is based on fieldwork conducted in the London 2012 Athletes’ Village – now East Village – in Stratford (a Newham Borough’s district located in East London). The thesis argues that various processes, practices and actors come together to produce an environment that prioritises and valorises the perceptions and preferences of white middle-class individuals. East Village, which was presented as a key element of the Olympic Legacy objective “Homes for All”, is a space that actively reproduces the exclusion of working-class and BAME individuals who make up the majority of Stratford and Newham population. Therefore, the intentions of social mixing are not met in practice.

In 2009, Triathlon Homes (TH) – a consortium between East Thames, Southern housing Group housing associations, and developer First Base – purchased 1,379 flats that were set to be affordable and social housing. In 2011, Qatari Royal family’s sovereign fund Qatari Diar, and British developer Delancey (QDD) purchased the remaining 1,439 properties, together with the public and retail space, as well as the freehold. QDD have set up Get Living London (GLL) as their housing management arm to let their luxury apartments on the Private Rented Sector.

TH is a private provider. Nevertheless, it was able to obtain a £110 million public grant from the UK government’s Home and Community Agency (HCA), and purchase socially rented apartments at the East Village. 675 of TH’s properties are available for social rent, while the remaining 704 are a mix of so-called affordable housing: shared ownership and intermediate market rent. Shelter charity and authors such as Paul Watt and Penny Bernstock have raised concerns about the effective affordability of these properties, which are not affordable for East London low to middle-income households. Concerns have emerged even with respect to social rent. In fact, TH’s social housing allocation policy is to prioritise in-work applicants and disabled people. TH also reserves the right to reject an application for affordability reasons, if a prospective tenant has got insufficient financial means to afford the rent and service charge. Triathlon also reserves the right to terminate a tenancy for antisocial behaviour. A private entity such as TH acts like a judge that questions prospective tenants about their financial capacity, entitlements and attitudes to demonstrate their fit in the neighbourhood. The result is that the most marginal applicants are rejected.

When a new social tenancy starts, the combination between rent and service charge is capped at the maximum social rent level allowable by the HCA. However, after the first year, rent and service charge increase annually, such that social rent levels become higher than what is prescribed by the HCA for registered landlords in receipt of public grants. Being privately owned, TH’s social housing units become subject to market logics, and they are no longer a form of welfare support for those who experience housing need.

Despite policy-makers claims, there is a sense that a real mix of tenures within East Village was not a genuine part of the plan, given that QDD and TH blocks are separated. Moreover, socially rented flats tend to be concentrated in different blocks. Even in the buildings where there is a mix of shared ownership, intermediate rent and social housing, the various tenures are often located in different floors, and socially rented flats tend to be concentrated on the lower levels. One is therefore left with the impression that the aim was to set the tenure distribution in a way that kept the most affluent residents separated from the least affluent ones. Such a separation has not facilitated social interaction between neighbours with different socio-economic backgrounds. On the contrary, it has fostered the identification of “us”, the hardworking and well behaving home owners, and “them”, the lazy and unruly social renters; with housing tenure becoming a synonymous of class and ethnic divisions. While Triathlon claims that it would be “near impossible” to know which flat is for social housing and which one is not, the residents know very well where social housing is. “The people who live downstairs” to point to social renters’ “antisocial behaviour” was a recurrent expression in the interviews with shared owners.

East Village’s design has been elaborated in collaboration with Secured by Design, a police initiative that specialises in security features and crime prevention projects. The various plots are equipped with secured entry doors and gates. 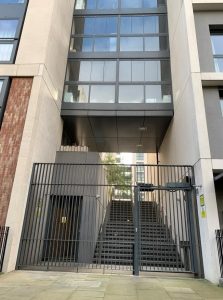 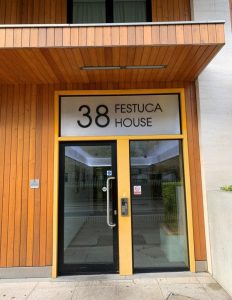 Moreover, the landlords have set up the East Village Management Company (EVML), which operates 24/7 CCTV, and employs security guards to patrol the public ground. Building gated communities serves the need to capture and defend social space, especially when white middle-class enclaves like East Village are built near lower-end areas. This vicinity fosters fear of crime and Mixophobia, which, according to Bauman means anxiety and discomfort about diversity.

EVML employs private security to protect residents from real and perceived external threats. However, the security also “protects” them from each other. The East Villagers are encouraged to refer to EVML if there is an issue with some neighbours. This could be viewed as an interference with the private sphere of interpersonal relationships. However, affluent residents approve this policy and they are happy to minimise contact with the neighbours, especially with social renters.

The spatial dimension of Pierre Bourdieu’s field theory suggests that the Habitus of white middle-class individuals influences their residential trajectory. As Michaels Benson has attested, they look for neighbourhoods congruent with their lifestyle, preferences and perceptions. QDD’s branding strategy is to stimulate affluent home seekers’ pre-existing dispositions. Words and photos representing local parks, gardens, waterscapes and local shops are very frequent in their advertising material. The area is branded as a green island that offers a healthy retreat from the chaos of London.

The Village’s environment requires high levels of maintenance. QDD understands the importance of living near nature and in an aesthetically pleasing environment for the white middle classes. They reproduce glimpses of wildlife, and EVML employs gardeners and streetcleaners to work on a daily basis to maintain the East Village public realm on a high standard of aesthetically pleasing, tidy and clean space. Contact with nature becomes a product for visual consumption. Residents interiorise the landlord’s branding strategy. The idea of East Village as a holiday place, a retreat from the stress of urban life is a recurrent theme in the interviews. 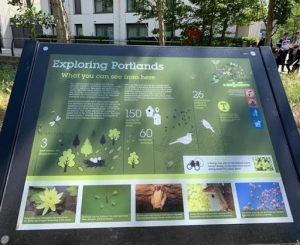 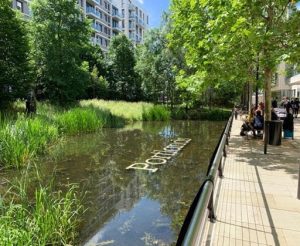 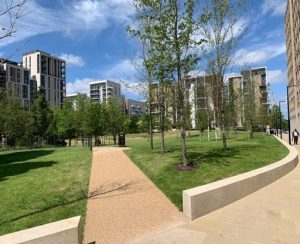 Moreover, with an awareness of the importance that local sport classes and events, such as markets and outdoor cinemas, have for affluent individuals, QDD organises these activities as part of the complete East Village package that they offer. Residents are not permitted to organise events independently. Everything that happens in the neighbourhood’s public realm must be planned and supervised by QDD. When events take place, seldom they foster active participation or interactions between neighbours. Yet, they convey a sense of belonging and localness. 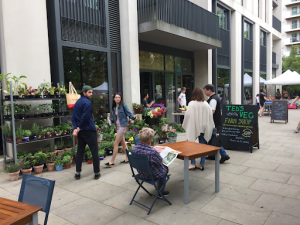 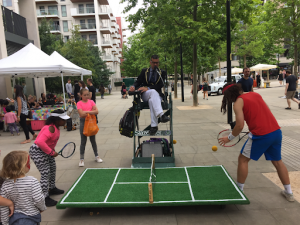 However, the processes described above, happen in contrast to an outside world – the Stratford area and its residents. The residents’ narratives of belonging draw clear socio-spatial boundaries between the cleanliness, vibrancy and beautiful landscapes of East Village, and the dirt, disorder and ugliness of the wider Stratford area. A sense of Mixophobia emerges in relation to the “other” that lives in Stratford.  Residents highlight that East Village has a totally different atmosphere from the rest of East London. These feelings demonstrate the fallacy of the promise to deliver an Olympic Legacy “for the direct benefit of everyone who lives there” as the London 2012 bidding team claimed. Even the presence of Stratford children in the Chobham Academy – the East Village public primary and secondary school – generates animosity. They are held responsible for the problems that the East Village children experience at school.

For middle-class individuals, artisanal products and locally-produced goods have a high cultural value. The East Villagers describe the shops in the neighbourhood as independent, in the sense that there are no chains. They are tailor-made for young, white middle-class residents. The shops are mostly food-based and they are there to complete the environment that the greenery and aesthetics of community have created, and that is intentionally cultivated by GLL on behalf of QDD. In reality, these shops are not independent. They are purposely selected to comply with QDD’s aspirations for the area.

The retail infrastructure becomes a symbol of the middle-class character of the place. The shop keepers act as social and cultural entrepreneurs. When I spent time in one of the Village’s cafés, I saw the managers and staff systematically building relationships with customers. They offer free bread to new customers, so that they come back, they talk to them, and babysit their children. This goes beyond the average staff-customer relationship. However, this is another product for the consumption of an idea of community that QDD offers.

The working-class and BAME residents who do not possess sufficient amounts of economic and cultural capital to afford and frequent the East Village shops are alienated from their middle classed and westernised eateries and atmosphere. QDD pushes back ethnically diverse and low-cost shops, by requiring unaffordable financial conditions to those who would like to open them. They are deemed to threaten public order and the place’s respectability. The affluent East Villagers develop a sense of moral ownership over the neighbourhood’s retail infrastructure. The healthy food restaurants and trendy shops belong “here”, in the Village; downscale shops and unhealthy restaurants as well as their BAME and working-class customers – belong “over there” in the Stratford area.

Despite being unable to afford the prices, several social renters agree with the landlord and their affluent neighbours. They become unconsciously complicit with the unequal power relations, norms and values that become hegemonic in the area, and perceive them as fair and just; a process that Pierre Bourdieu describes as symbolic violence. They claim that East Village is meant to be an upper-class area of Stratford, where they feel privileged to live. Again, this goes to the heart of the Olympic promise. The residents experience the neighbourhood as something very different from what was supposed to be: a 50-50 affordable-private, socially mixed development. Particularly damning is the fact that QDD and TH allowed the East Village’s community café – arguably the only place designed to be truly inclusive of all socio-ethnic groups in the space – to be shut down due to lack of funds to keep it running.

Despite the presence of many master-planned communities in London, seldom can we observe this level of micromanagement. QDD captures part of the sovereignty that public authorities exercise over urban space, and uses its authority to tell residents how to behave, as well as deciding who belongs and who does not. A state that aims at delivering socially mixed neighbourhoods and affordable housing through mega-events and partnerships with large housing corporations legitimises instead the logics of social inequalities.