The presentation summarises the findings of the British Academy funded research “Conversing with Goliath” which assesses the relationship between citizen participation and extractivism in Mexico. Drawing on the findings, Valeria will outline different scenarios that work as gateways to examine and uncover municipal governance within mining. Focusing on the scenario of disasters caused by mining, the presentation will provide a very first attempt at building a conceptual framework that interweaves debates on municipalism and local public value.

RSVP and more details from jenni.cauvain@dmu.ac.uk.

CURA seminars will continue in 2020, opening with a talk on informality on 29th January 2020, with Dr Adriana Massidda, Early Career Academic Fellow in Architecture, DMU.

In this post, Dr Simon Stevens exposes the strategies used by local authorities and managers of pseudo-public spaces in English cities, to disperse, deter and dehumanise homeless residents. Seen through the eyes of a detective searching for a homeless witness of an alleged crime, the narrator exposes how our cities are responding to the ongoing crisis of homelessness following a decade of austerity.

It is a grey morning. A man is looking for a witness to an alleged crime. Normally, he would have an address and could simply pay a visit. However, this time it is more complicated. The witness is homeless. He has a description of her but he must find where she is. This is why he is up and about very early. He is hoping to catch her still sleeping somewhere. Last night there was rain – he can still feel the ghost of it in the air. So, he is going to look for places that would provide shelter.

Stereotypically, he thinks of the park. There are benches and bus shelters there. As he arrives a council worker is just unlocking it – apparently they close it overnight now. This would mean she could not have slept here. He decides to look anyway, in case she managed to climb over the gate railings. But, when he approaches the benches he notices something new about them. They have been modified in a way that makes them a lot harder to sleep on. 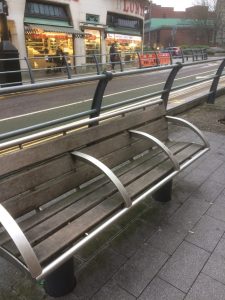 He heads towards the train station. The second wave of commuters are arriving to the calming sound of classical music played over the station tannoy. It is only when he comes across a discarded newspaper that he learns that during the night, from midnight to 6.30am, the soothing strains of Mozart are replaced by bagpipe recordings, played loudly, on a constant loop (Durkin, 2015). The detective glances across the story, picking out the key points: ‘Earlier this year the Echo reported how commuters felt intimidated by the growing numbers of rough sleepers congregating at the travel interchange’. Then, further down the article: ‘One coach station worker, who asked not to be named, said: “Basically, the council has been playing bagpipe music through the night and it seems to be doing the job. They just cannot stand it, you try getting any sleep with that going on”. He continues to read, noticing with some interest, a local MP had been interviewed for the article. ‘Rough sleepers have rights’ he is reported to have said, ‘so do the other citizens, workers and businesses’: they ‘have the right not to be intimidated or to have to face the daily ordeal of belongings left in doorways when they arrive for work’ (Exeter City Council, 2015). Sighing, he remembers that nearby there is a multi-storey car park with a bridge-like entrance. He investigates but finds only cement spikes. So, no rough sleepers here. 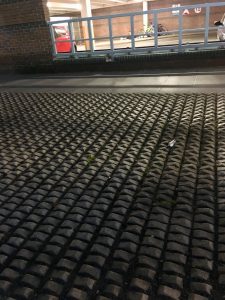 Figure 2: Bournemouth: under a bridge, outside the multi-storey car park connected to ASDA, opposite the train station (image source author)

He decides to change tack. The street homeless also need access to hygiene facilities. He heads to the public toilets, only to find them locked – seemingly permanently. A sign informs him that there are pay-as-you-use toilets nearby. On his way to those ones, he comes across a community support officer. The detective is getting increasingly anxious at not finding the witness, because of these dispersal tactics. He approaches the officer who, he realises when he gets closer, is actually moving on some rough sleepers from a crevasse outside a shop, for being too close to an ATM machine. The detective asks why. The officer explains. She tells him a Public Spaces Protection Order has recently been implemented in this area to prevent anti-social behaviour, and she is simply carrying out her duty to disperse and confiscate(Home Office, 2014, pp. 32-38)(Hackney Borough Council, 2015, p. 1), as well as prevent ‘aggressive begging’ (Chelmsford City Council, 2015). Thinking of the closed toilets, replaced by pay-as-you-use loos, he worries about begging being legislated against. 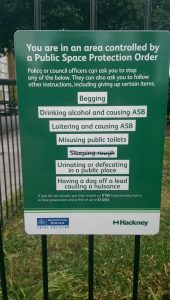 The officer continues, only last week she was moving someone on for chalking the pavement, because ‘peddling’ and ‘marking surfaces’ has been added to the list of prohibited behaviours (Swindon Borough Council, 2015)after a man was drawing on the pavement for money, with the phrase ‘homeless art beats begging’.She tells the detective that PSPOs are ‘set by the local council’ (Home Office, 2014, p. 46). They enable council boroughs to introduce penalties to forms of behaviour they deem to have a ‘detrimental effect on the quality of life of those in the locality’ and are ‘persistent’ (Crown Court, 2014, p. 33). Once in place the PSPO can have its jurisdiction range ‘increased’ (Crown Court, 2014, p. 33)to cover a wider or previously unaffected area. A PSPO can be brought in if ‘it is likely that such activities will be carried on’ and that ‘they will have such an effect’ (emphasis added): it is therefore able to impede someone on the premise that they may cause a disturbance in the affected area. The detective frowns. This means that at any given point during the day, the homeless are always potentially about to commit anti-social behaviour. It is anti-social behaviour that presumably disqualifies the homeless from being seen as part of the ‘locality’, instead being seeing as something that causes a ‘detrimental effect’ on the ‘quality of life’ of those who are.

The officer shrugs almost apologetically. She tells the detective of other restrictions: the rise of privately-owned public spaces. These‘Pseudo-public spaces – large squares, parks and thoroughfares that appear to be public’ are ‘actually owned and controlled by developers and their private backers’. Such spaces are ‘on the increase, as ‘local authorities argue they cannot afford to create or maintain such spaces themselves’. They are therefore regulated by the companies that own them, meaning they ‘are allowed to draw up their own rules for “acceptable behaviour” on their sites and alter them at will’. People can be moved on by private security guards for ‘protesting, taking photos … or just looking scruffy’ (Shenker, 2017).

The detective is now a little aghast. He understands that the homeless somewhat disrupt the image of prosperity commercial areas of town centres need to promote, but this just seems to be a harsh targeting. His anxiety increases. Time is getting on and he has to find the witness before nightfall. He decides to walk further into the commercial part of the high street. Shoppers and tourists are where homeless people need to be, if they are going to ask for money, albeit without attracting the attention of the community support officers. However, when he arrives he is a little shocked to see a collection of anti-begging posters. It is the way the homeless people are portrayed in them. Turned into a generalised, and threatening, stereotype. A deviant, anti-social other. The posters seem to justify the rest of the hostile architecture. It is at this point he realises that these dispersal tactics are not just about physically removing the homeless from view, but ensuring we awkwardly overlook their suffering when they are present. Invisibilising their visibility. Suddenly he wonders: perhaps he has already passed his witness. He just did not notice her. He only saw what he was told from the messages in the architecture around him: an anti-social nuisance. He decides there and then he will not look at a park bench in the same way again. Should you?

Simon completed his PhD at Loughborough University this year. His thesis investigated hostile architecture and its effects on the street homeless, and also involved a deep discussion on storytelling methods for political theory. During his doctoral research, Simon cultivated an interest in alternative modes of delivery and epistemologies, such as moral sentimentalism, genealogy, and Black feminist thought. Simon teaches at DeMontfort University where he is the module lead for the Political Theory and Power, Politics and Morality courses.  He is currently writing a book about the history of hostile architecture with Vernon Publishers and have articles under review with Social Theory and Practice and Contemporary Political Theory.

This blog post is based Simon’s publication about homelessness in the peer-reviewed Sage journal Organization Studies. This was a result of an international essay competition run by the Independent Social Research Foundation. The paper is accessible via https://journals.sagepub.com/doi/full/10.1177/0170840616686130